Some people call them the Ship of the Desert because they can carry large loads across great distances. Arabs have been using them for transportation for more than 3,000 years.

Camels are one of the unique animals in the world and have many interesting characteristics.

In this article, we will discuss everything about camels, from their description to appearance, diet, habitat to reproduction and other interesting facts. The camel (Camelus dromedarius) is a large, even-toed ungulate with distinctive humps on its back.

The two extant species of camel are:

Females are generally about 10% smaller than males.

The Bactrian camel often has a shaggy coat of black hair.

Both species have long, curved necks and relatively long legs.

The dromedary is the tallest of the two species and can reach up to 2 m (6 ft 7 in) at the shoulder.

The camel's head is relatively small and has a triangular-shaped face with two furry eyebrows that protect the eyes from blowing sand.

Its nostrils can close to keep out the dust of a desert storm.

The camel's mouth is wide, allowing it to consume large amounts of dry vegetation.

The front feet of a camel are narrow and pointy, while the rear feet are much more comprehensive, providing more support when the animal is standing upright.

Toes on all four feet are webbed to help keep them from spreading too far apart when walking on soft sand.

The camel's hump (or humps) is not made of fat, as many people believe, but rather is a reservoir of watery fluids that the animal can draw on during extended periods without access to water.

When the hump(s) is/are empty, the camels back appear sunken.

You can get Gage Beasley's Camel Soft Stuffed Plush Toy and be sure your little one will love it. It is very soft, made of high-quality materials, and can be easily washed. Camels are primarily herbivorous, eating leaves, bushes, grasses, and flowers. They eat whatever greens are available in the wild, but domesticated camels are often fed hay, straw, and other dried plants.

Thanks to their three-chambered stomachs and specially adapted intestines, they can digest this thorny vegetation.

Camels in zoos get special food pellets and hay and vegetables.

Dromedary camels are well-suited to their desert habitats. They can go for long periods without drinking—up to two weeks—and can consume large amounts of water when it is available.

Bactrian camels are well-adapted to cold, dry conditions and can go for long periods without drinking, but they require access to water every few days.

The mating season for camels generally occurs between late autumn and early spring.

Females give birth to a single calf (rarely twins) after a gestation period of about 13 months.

The newborn camel weighs about 25 kg (55 lb.) and can stand within 30 minutes of birth.

A calf's coat is brown or fawn at birth, but it lightens to a creamy white within two weeks.

Young camels stay close to their mothers until they are weaned at about 18 months.

Males reach sexual maturity at about three years of age, while females mature a bit earlier, at two to three years.

A camel can live up to 40 years in the wild but typically only lives 20-25 years in captivity.

The dromedary camel can be found throughout the desert areas of North Africa, the Middle East, and northern India. While the Bactrian camel is found in Central Asia.

Both species are well-suited to their arid habitats and can go long periods without drinking water.

Camels are primarily active during the cooler hours and rest during the day's heat.

They typically live in small herds of 10-20 individuals but congregate in larger groups when searching for food or water. 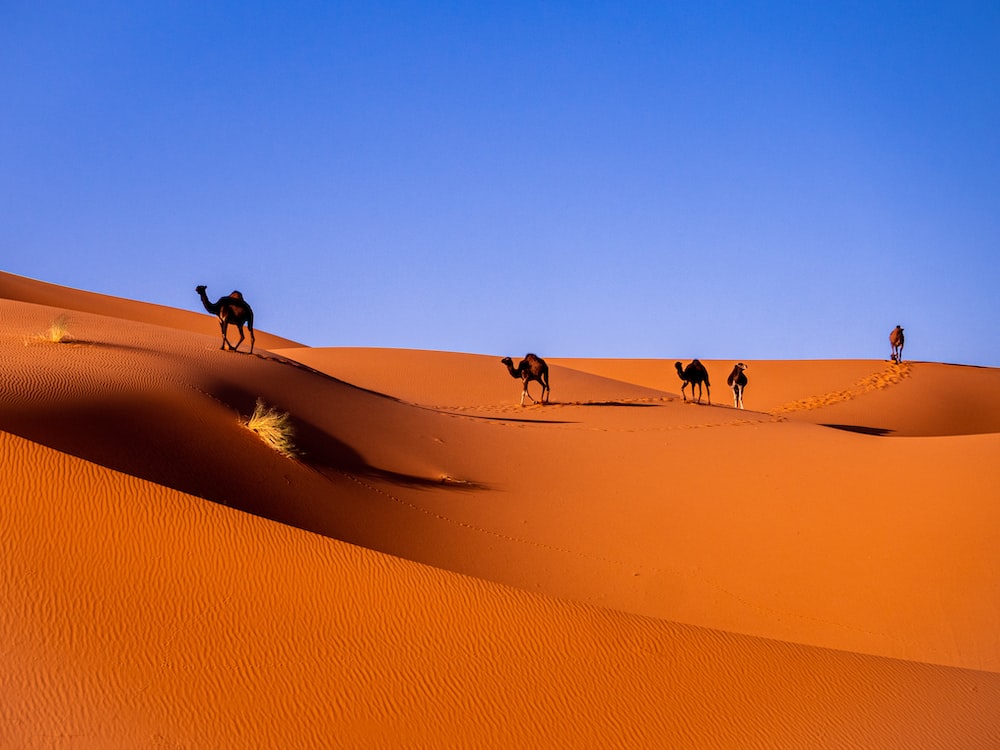 The dromedary camel is not considered to be at risk of extinction. However, the Bactrian camel is "Critically Endangered" by the IUCN Red List.

The primary threat to the Bactrian camel is habitat loss due to human settlement and agricultural expansion. These activities have led to a decrease in suitable grassland habitats for the camel.

The Bactrian camel is also hunted for its meat and fur. Conservation efforts are underway to help protect this species from extinction.

Now that you know a little bit more about camels, here are some interesting facts that you may not have known:

Camels are fascinating animals that have a lot to offer. They are well-suited to their desert habitats and can provide us with milk, meat, and other products. We can ensure that these animals will be around for many years with proper conservation.