Today's GB blog post is dedicated to the beautiful dugong - a cousin on the manatee that our readers are likely more familiar with.

Dugongs are gentle, herbivorous marine mammals that can be found in tropical and subtropical waters around the world.

They are related to both manatees and elephants and are sometimes called "sea cows" because of their grazing habits.

So buckle up, you're about to learn more about these fascinating cows of the sea! 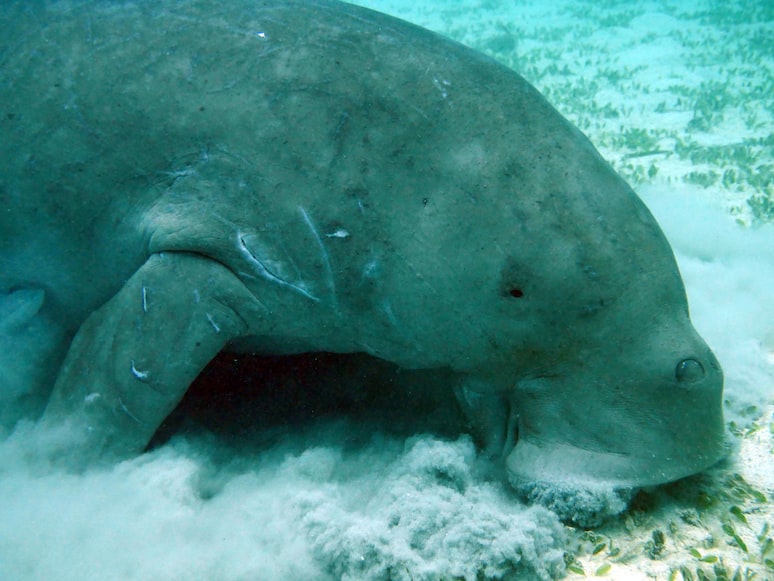 Dugongs are medium-sized marine mammals. They're grayish-brown in color and have a fluked tail. Its front flippers are large and its hind flippers are small. Dugongs have two teats, just like cows on the land.

Dugongs can reach up to three meters in length and weigh up to four hundred kilograms (882lbs).

The dugong male can reach up to 11 feet in length and weigh as much as 900 pounds in rare specimens. Females are usually a bit smaller, reaching lengths of around nine feet and weighing up to 700 pounds.

A dugong's body is thick and torpedo-shaped, which helps it move through the water with ease. Its head is large and its eyes are small. It has two tiny ear openings, but no external ears.

Despite their size, they are graceful swimmers and are able to stay underwater for up to six minutes!

Its mouth is wide and contains two incisors (tusks) that are used for grazing on seagrass.

Dugongs are strict vegetarians and their diet consists mainly of seagrass. They're known to eat around eighty different species of seagrass!

They use their large lips to vacuum up the seagrass, which they then grind up with their molar teeth.

Dugongs are often found in seagrass meadows, which are areas where the seagrass is very dense. These meadows provide the dugongs with plenty of food and protection from predators.

However, they can also be found elsewhere—like in your rooms, maybe? Without the need to pump a whole sea of water, Gage Beasley's Dugong Sea Cow Soft Stuffed Plush Toy is the real deal. It's big, fluffy, and cuddle-ready! Dugongs are polygamous, meaning that they mate with more than one partner. The mating season takes place between April and November.

During this time, the males will compete for mates by showing off their tusks and making loud grunting noises.

Once a male has won over a female, they will mate. The gestation period (pregnancy) for a dugong lasts around thirteen months.

Dugongs usually only have one calf, but twins have been known to occur. The calves are born tail first and weigh around 60 pounds.

They nurse for up to two years and are fully weaned at around age three.

These sea cows are found in tropical and subtropical waters around the world. This includes coastal areas of Australia, India, Southeast Asia, and parts of Africa.

As mentioned, they're commonly found in seagrass meadows, where there is plenty of food to eat.

They tend to live in shallow, coastal waters where the water is relatively warm. The IUCN lists the dugong as a vulnerable species. This is due to the many threats they face, such as being hunted for their meat and oil, being hit by boats, and losing their habitat to coastal development.

Dugongs are protected in some areas, but much more needs to be done in order to ensure their survival.

You can help by supporting organizations that are working to protect these creatures and their habitat.

In conclusion, dugongs are one of the most interesting marine mammals around. Dugongs are fascinating creatures with a lot of similarities to cows on the land, which is why they're often called "sea cows.". They're gentle giants that play an important role in their ecosystem. It's important to do what we can to protect them and their habitat.

Unfortunately, they're facing many threats, and much more needs to be done to protect them. You can help by supporting organizations that are working to save these creatures!

If you're lucky enough to see one in the wild, be sure to take some photos and enjoy this amazing experience!

Did you enjoy learning all about Dugongs? Let us know in the comments below!