The Peacock is a bird of great beauty, with its stunning tail feathers and magnificent colors. But there is more to the Peacock than just its pretty feathers. Here are some facts about peacocks that you may not know.

Peafowl, or Peacock, refers to a significant, often ground-dwelling bird of the Afropavo and Pavo group. The Peacock is a pheasant family member; two of the three species are native to Asia, while the last is native to Africa.

Peacocks are famous for the colorful fan-like covert or plumage they often display. However, they are semi-domestic birds and can be found in parks and aviaries worldwide. 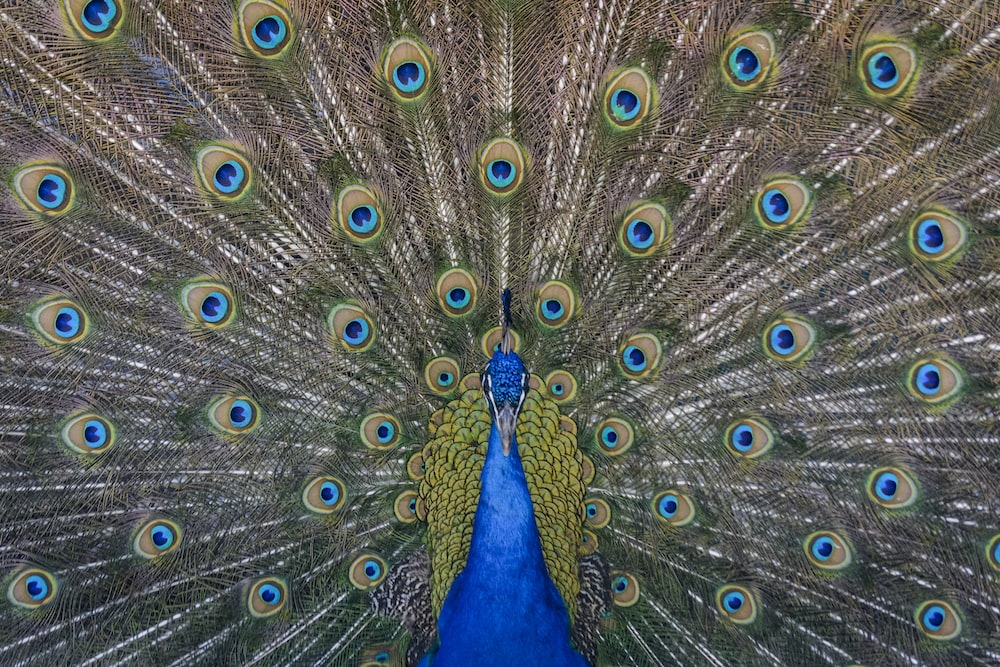 The Peacocks' brilliant 'train,' featuring over 200 glistening feathers with eyespots on each, is a show-stopper. The head, neck, and breast of the Indian Peacock are blue and green iridescent. Their extended coverts are not the tail quill feathers but long upper tail feather coverts. The train is made of bronze and green, has a series of 'eyes' that are more obvious when the tail is fluttered, and has a fanned tail.

Females have a duller color than males, as is typical in many other avian species. Peahens are brown with lighter undersides. They don't have the extended upper tail coverts like their Peacocks. They may have an iridescent green tint on their neck.

Male and female Peafowl have crests on the top of their heads, also seen in Green Peafowl species. The male of the Green Peafowl, unlike Indian Peafowl males, has green and gold plumage and black wings with a sheen of blue.

Green Peahens are identical to Green Peacocks, with briefer upper tail feather trains and a little less iridescent in certain areas, unlike the Indian Peafowl. It's tough to distinguish females from males in the period when the male has no coverts.

Peafowls are huge birds, with males estimated to be up to 7.5 feet in length and females considerably smaller at 34 inches. The male Peafowl's tail may be up to 5 feet long.

Peacock adults weigh about 13 pounds, and mature Peahens can weigh up to 9 pounds. Male and female Peafowl have robust and powerful metatarsal spurs called "kicking thorns" to defend themselves against predators, just like other Galliformes. They have three sturdy toes facing forward and one backward, with solid legs. Most species cannot fly for long distances since their wing surface-to-- body weight ratio is low.

In addition to the Green and Indian Peafowl, those kept in captivity have developed several mutations. The Indian White Peafowl is one of them. The Congo Peafowl is another creature found in the Central African rainforest.

All Peafowl species are omnivores, living on primary plants such as flower petals and seeds. Peafowls also eat animals such as insects, locusts, ticks, ants, and termites. They also prey on small reptiles such as young cobra snakes, amphibians, and arthropods.

They go about the open areas, raking through the leaf litter and other debris. They scratch at the dirt in search of anything edible, using their beaks to move things out of the way. Typically, Peafowl retreats to forests during the hottest part of the day to avoid the heat.

Peacocks are native to habitats where many massive predators dwell. Tigers, Wild Dogs, and Mongooses are all predators of Peafowl in India and Southeast Asia. Similar predators like Leopards and Lions threaten the Congo peacocks since Tigers are not found in Africa. Many wild animals are known to prey on Peafowl, and their eggs are also at risk of being eaten.

The Peacock is a typical example of sexual selection playing a role in evolution. According to research, peahens prefer to mate with the most impressive males with the most significant number of eyespots in their tails.

The males with the biggest eyespots tend to be healthier, better fathers, and lead youngsters more likely to survive, according to studies. The beauty of the Peacock goes deeper than skin. Peacocks shed their tail feathers in August and begin to grow them again.

To attract the Peahen, the male spreads his covert of feathers and shivers it. Backing toward the receptive female, swinging around to show off his beauty before retreating several steps and bowing is typical for the male.

The vocalization follows the display; then, the male makes loud noise known as "crows" that far exceeds a Roosters crow in intensity. If the Peahen is mesmerized, she will become one of his harem of Peahens; like most male animals with a highly ornamented plumage, Peacock leads a polygamous lifestyle.

Peacocks have no part in raising the young and are therefore not as inconspicuous as females. The Peacock depends on the Prehen without showing it, just as the Lioness hurt for the Lion to feast.

Peacocks mature at three years old, but peahens generally reach maturity by two years old. Peahens may lay up to 12 brown-like buff-colored eggs between April and September. They lay eggs in a nest built with grass on the ground. For 4 weeks, the Peahen will sit on the eggs to incubate them and hatch them on the 28th day.

Peachicks weigh 3.6 ounces at birth, are fully feathered, and can fly after a few weeks. After about 10 weeks, these chicks will be independent and leave their mothers to strike on their own. Because newborn birds must learn to fly rapidly to survive, they often roost in trees with their mothers, protecting them from predators.

The Peahen teaches the Peachicks how to feed and make various sounds. Young birds under the age of one year are known as Peachicks. Male Peachicks' covert will start to develop after three years and will grow into full-fledge Peacock over time. 40 – 50 years is the life expectancy of a healthy Peafowl.

The Peafowl is a ground-dwelling bird that prefers forest areas and agricultural fields. They may be found in rainforests and bushlands as well. Nests are generally built on the ground, although some of them will roost in trees instead.

The main reason birds build nests in trees is that they provide them safety and cover. They will seek refuge and sleep in the branches of trees at night to avoid predators. During the day, Peafowl leaves their roosts to seek food.

Don't worry, though. If you have Gage Beasley's Peacock Bird Soft Stuffed Plush Toy, you wouldn't have to worry about them leaving their roosts. They're beautiful and huggable, what more can you ask from a plushie? The IUCN lists the peacock as least concern. Peacocks are not currently threatened, but their populations could decline in the future if habitat loss and degradation continue. Peacocks rely on forests and woodlands for shelter and food, so these habitats must be well-protected to ensure the long-term survival of this species.

Conclusively, the Peacock is not only a beautiful bird but has many other unique characteristics that make it one of the most exciting creatures in the world. Thanks for reading.