Imagine, for a moment, that you are transported back in time to the Late Cretaceous period. You find yourself in a dense forest flanked by towering trees and underbrush.

As you scan your surroundings, you notice a small, fast-moving creature darting between the trees.

This is the Pyroraptor, a small but fearsome predator that lived during the Late Cretaceous period.

Although it was not a giant dinosaur of its time, the Pyroraptor was a ferocious hunter that preyed on smaller dinosaurs.

This blog post will take a closer look at the Pyroraptor and its historical place. 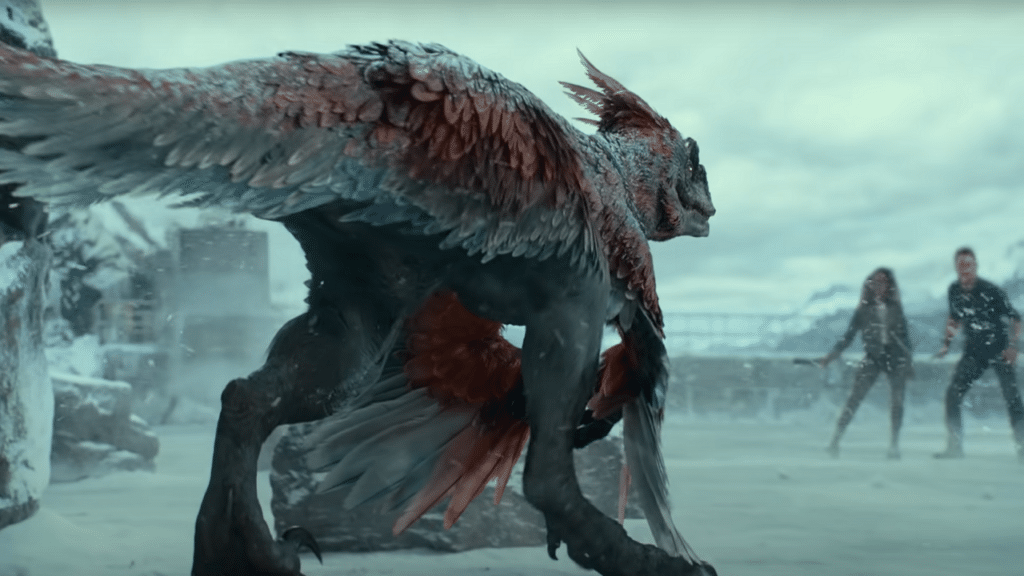 The Pyroraptor was a small dinosaurian measuring six feet long from nose to tail.

It had a slender build, long legs and arms that ended in sharp claws.

It also had a curved tail for balance while running with fast movement or chasing prey over short distances - up close if needed!

The Pyroraptor's most distinctive feature was its large, curved claws.

The claws on this dinosaur's feet were three to four inches long and were used to slice through the flesh of its prey.

The Pyroraptor was covered in feathers, which helped to keep it warm in the cool Late Cretaceous climate.

The Pyroraptor's feathers were also helpful in camouflage, as they allowed the Pyroraptor to blend in with its surroundings.

Although the Pyroraptor could not fly for long distances, it could glide from tree to tree, using its feathers as a parachute.

The Pyroraptor was a meat-eating dinosaur with an exciting set of teeth and claws to tear through prey.

It had strong feet designed for running faster than its prey, sharp claws to slice through flesh easily at close range or tear off chunks of meat with those huge teeth!

The long tail helped keep balance while chasing down smaller dinosaurs who often couldn't find safety among branches low enough that an animal twice their size could not reach them without jumping quite some distance first.

But these feathered carnivores were not perfect: sometimes, they would eat each other when the competition got too fierce (Packs usually only consisted of 3-5 individuals).

And no matter how agilely oriented toward catching food.

The Pyroraptor belonged to a group of dinosaurs known as theropods, including the Velociraptor and the Tyrannosaurus Rex.

Theropods were characterized by their large, sharp claws and their carnivorous diet.

It is believed that the Pyroraptor reproduced similarly to other theropods, laying a clutch of eggs and then incubated by the female.

Once the eggs hatched, the young Pyroraptors would have been cared for by their mother until they reached maturity.

While little is known about the specifics of Pyroraptor reproduction, it is clear that this dinosaur was well-adapted to its environment and would have been a formidable opponent in the prehistoric landscape.

The Pyroraptor was a dinosaur that lived approximately 80-65 million years ago during the Late Cretaceous period.

This period was characterized by cooler temperatures and a decline in dinosaurs.

The Pyroraptor inhabited what is now China and Mongolia during the latter half of the Cretaceous Period, which lasted from 145.5 million to 66 million years ago.

This area was lush and green during the Late Cretaceous, with many trees and plants.

It is thought that the Pyroraptor preferred to live in forested areas, where it could use its claws to climb trees in search of prey.

It is believed that the Pyroraptor went extinct at the end of the Cretaceous period, along with all other dinosaurs.

The cause of the dinosaurs' extinction is still a mystery, although there are many theories.

Some scientists believe that a meteorite struck the Earth, causing widespread devastation and killing off all the dinosaurs.

Other scientists believe that the dinosaurs were killed off by disease or changes in the Earth's climate.

The first fossil of the Pyroraptor was discovered in 1993 in the Gobi Desert of Mongolia.

This fossil was found by a team of paleontologists from the American Museum of Natural History.

Since then, many more fossils of the Pyroraptor have been found in China and Mongolia.

These fossils have helped scientists learn more about this dinosaur's appearance and behavior.

The Pyroraptor is a fascinating creature, and its discovery has helped shed light on the mysteries of the prehistoric world.

Although this dinosaur is now extinct, its legacy will live on in the fossil record and in people's imaginations worldwide.

Other than fossil records, its legacy will also live on through Gage Beasley's Pyroraptor Dinosaur Profile Unisex T-Shirt! Everything that there is to know about the dino—all in one piece of clothing.

Here are 10 of the most interesting facts about the Pyroraptor:

The Pyroraptor was a small, fast-running carnivore that lived in what is now Mongolia during the Late Cretaceous period. Its name comes from the Greek words for "fire" and "seizer," referring to its supposed habit of raiding nests and eating hatchlings.

However, recent studies have suggested that the Pyroraptor may have been primarily a scavenger rather than a predator.

Regardless of its diet, the Pyroraptor was an agile creature that could reach speeds of up to 40 miles per hour.

It was also equipped with a giant, curved claw on each foot which it may have used to help it catch prey.

With its distinctive appearance and impressive speed, the Pyroraptor is one of the most famous dinosaurs among kids and adults.

Although it is now extinct, this fantastic creature will continue to fascinate people for years.