Have you ever seen a fish walk on land? If not, then you're in for a treat! The Tiktaalik is a prehistoric fish that was able to walk on land.

It's a fantastic creature that has a lot of exciting features. In this blog post, we will discuss the Tiktaalik in detail and learn more about this fascinating fish! 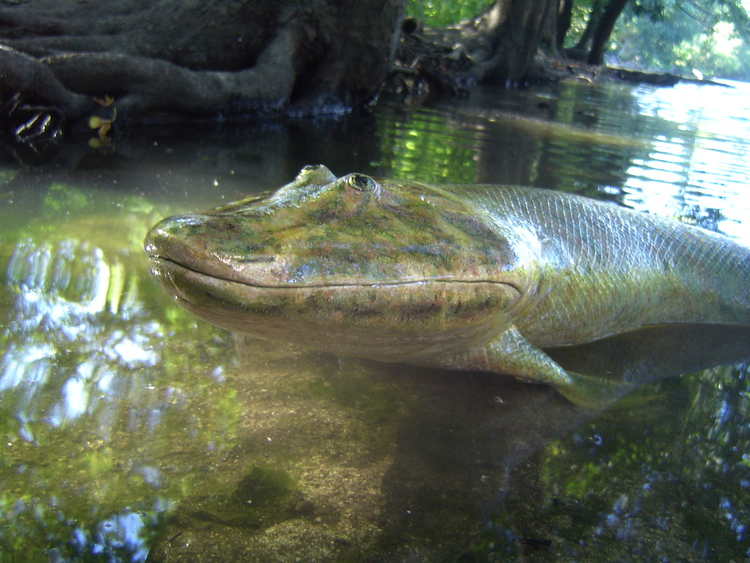 Tiktaalik is a genus of extinct fish that lived during the Late Devonian period. The most famous member of this genus is Tiktaalik roseae, which was discovered in 2004 in Canada's Nunavut Territory.

This creature is significant because it represents a transitional form between fish and tetrapods (four-legged land vertebrates).

Tiktaalik had many features that were similar to those of modern fish, including gills and fins. However, it also possessed certain traits that were more akin to those of tetrapods, such as limbs with digits and the ability to breathe air.

This unique blend of features makes the Tiktaalik a vital part of our understanding of evolutionary history.

The Tiktaalik had a crocodile-like head with dagger teeth, fins with digits, and a flexible neck.

It is believed that the Tiktaalik was a predatory animal that hunted in shallow waters.

The Tiktaalik provides scientists with essential insights into the evolution of land animals from fish.

It is an actual example of how small changes in an organism's environment can lead to significant evolutionary changes over time.

Ultimately, the Tiktaalik provides valuable insights into the transition from water to land-dwelling animals. The Tiktaalik is an ancient creature that lived during the Devonian period.

It is a transitional fossil, meaning it shares characteristics with fish and tetrapods.

The Tiktaalik diet was likely very similar to other fish from its time.

Its diet consisted mainly of small invertebrates such as worms, insects, and crustaceans. It also fed on small fish that it caught in its jaws.

The Tiktaalik also had sharp teeth and a powerful jaw, suggesting it was a predator.

The Tiktaalik is a vital fossil because it helps to fill the gap between fish and tetrapods.

It provides evidence that creatures with legs and arms evolved from fish.

The Tiktaalik diet helps to support this theory, as it shows that early tetrapods were opportunistic predators that fed on a variety of tiny creatures.

One of the most well-known examples of a transitional fossil is the Tiktaalik. This fish has both characteristics of fish and amphibians, making it a perfect example of how one species can evolve into another. But how did the Tiktaalik reproduce?

Tiktaalik roseae probably reproduced in a similar way to other tetrapods.

Females would likely have laid eggs on land, which males then fertilized.

The eggs would then hatch, and the young would start to grow into adults.

Researchers believe that Tiktaalik roseae may have been able to reproduce both on land and in water, depending on the availability of mates and suitable habitats.

This would have given them a significant advantage as they adapted and evolved into new environments.

The Tiktaalik rose to fame in 2006 when its fossil remains were discovered on Ellesmere Island in Nunavut, Canada. It was an exciting find because the Tiktaalik is considered a transitional fossil, providing evidence of how fish evolved into land-dwelling animals.

The Tiktaalik lived during the Late Devonian period, about 375 million years ago. At that time, Ellesmere Island was part of a large landmass called Laurentia. The climate was warm and humid, and the landscape covered swamps and shallow lakes.

The Tiktaalik is thought to have inhabited freshwater environments like rivers and lakes. Its fossils have been found in Greenland, Iceland, Scotland, Australia, and the United States.

The Tiktaalik went extinct at the end of the Devonian period, about 360 million years ago. Scientists believe that the Tiktaalik's descendants, the early tetrapods, were better suited for life on land and could survive the mass extinction that wiped out most of the fish at the time.

The Tiktaalik was discovered in 2004 by a team of paleontologists led by Neil Shubin. The team searched for fossils of transitional fish-tetrapod animals in Devonian-aged rocks on Ellesmere Island.

On the first day of their expedition, the team found a fish jawbone on a riverbank. They excavated the site and found several Tiktaalik fossils, including a nearly complete skeleton. The fossils were sent to museums and universities for study and finally published in 2006.

The Tiktaalik has since become one of the most well-known prehistoric animals. It was featured on the cover of Time magazine and was the subject of a book by Neil Shubin called Your Inner Fish.

The Tiktaalik is important because it helps us understand how fish evolved into land-dwelling animals. The Tiktaalik's fossils prove that fish had begun to evolve limbs and other features that would eventually allow them to live on land.

The Tiktaalik is also important because it helps us understand the mass extinction at the end of the Devonian period. Scientists believe that the Tiktaalik's descendants, the early tetrapods, were better suited for life on land and could survive the mass extinction that wiped out most of the fish at the time.

The Tiktaalik is an extinct genus of sarcopterygian fish that lived during the Late Devonian period.

It is notable for being one of the first known examples of a tetrapod, an animal with four legs. Here are ten interesting facts about the Tiktaalik:

The Tiktaalik is an important prehistoric animal because it helps us understand how fish evolved into land-dwelling animals.

It also helps us understand the mass extinction at the end of the Devonian period.

The Tiktaalik is a fascinating creature providing insight into our planet's history.